I’ve had several instances when HP System Management isn’t operational and I don’t physically have access to a server to check its serial number.  Thankfully this can be easily queried from windows by running the following command from a command prompt: 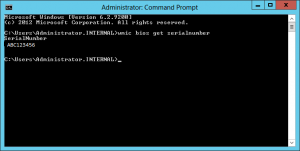 Note: This does work for other manufacturers – we are just primarily an HP house. 🙂