Tandberg RDX drive will not eject

We recently have had a customer runing image backups from two Hyper-V guest servers using Shadow Protect to a UNC path to the host with an attached USB RDX drive.  Even though ShadowProtect was not currently running a backup, it was keeping a handle to the volume preventing the RDX from ejecting.  Tandberg has provided a work around for this with a script that bypasses the requirement for exclusive volume lock before ejecting.  The script is “EnableBestEffort.bat” and is located in  “C:\Program Files\RDX\Service” (32bit system) or “C:\Program Files(x86)\RDX\Service\”.  Simply run this on the system with the RDX attached and it will overwrite the requirement for exclusive volume lock.  Details on this can be found here: http://www.tandbergdata.com/knowledge-base/index.cfm/best-effort-lock-button-push-eject-method/ 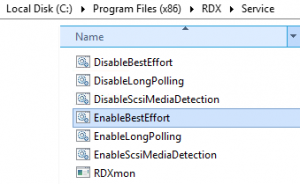