Increase managed FortiAP’s with Fortigate 100D (and other models) Firewalls

With each built-in wireless controller in the Fortigate firewalls there is a max number of supported AP’s.  By default this number is halved when you use tunnel mode (ie. all controllers tunnel back to an interface/captive portal on the Fortigate 100d’s).   If you are using a central Fortigate/Fortigate HA Cluster as your controller it can be quite easy to go over 32 supported AP’s.  By default the 32 number is a hard limit(on the 100D, larger devices have larger limits), whether you are using tunnel mode or not.  In order to disable tunnel mode on your AP, thereby doubling your managed AP’s this is the process:

From the Fortigate’s CLI edit the controller config, edit your specific AP by Serial Number 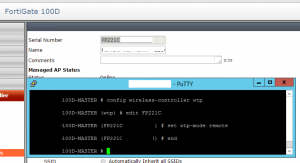 Type: “set wtp-mode remote” and type end.  Now you should see the number of supported devices as increased: