I’ve recently been running several ESX 4.1 to ESXi 5.1 Upgrades.  Generally this is a much easier process due to the Update Manager now handling ESX/ESXi 4.+ Upgrades directly from the vCenter.  That being said, I have ran into the following issue when running an upgrade: 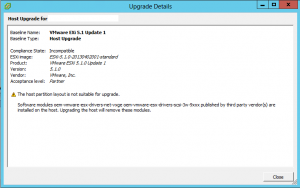 The majority of upgrade errors I have encountered are generally due to custom VIBs that are no longer compatible & can be bypassed by selecting the box for “Remove installed third-party software that is incompatible with the upgrade, and continue with the remediation.” 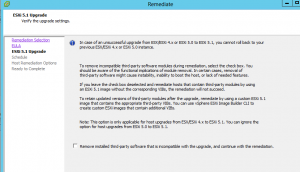 In this situation however, I’ve found you need to remove the problem patch before getting to this screen.  The easiest way to perform this is by connecting via console or SSH to your ESX host and running the following command: “esxupdate query -a”.

Reboot your host and continue your upgrade