In order to specify device driver install package for a specific model during your SCCM or MDT task sequence, you can create a WMI Query for the specific models covered by your driver pack. ie.
Select * From Win32_ComputerSystem WHERE Model LIKE “%HP%%600” or LIKE “%HP%%800” 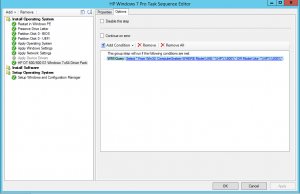 In the above example, as I am running an HP Zbook 15, it would be Select * From Win32_ComputerSystem WHERE Model LIKE “%HP%%Zbook”