When setting up a new System Center Distribution Point recently, I received the following error in the SMSPXE.log:

This is because, even if you only using the x64 WinPE image, SCCM/WDS requires that both x64 & x86 to be present.  Simply distribute your x86 image from SCCM and restart the Windows Deployment Service on your Distribution Point. 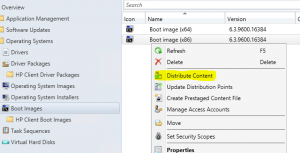