When installing Microsoft Exchange PST Capture on Server 2012/2012R2 you may receive the following message:
“You must have Windows PowerShell 3.0 installed in order to install this product” 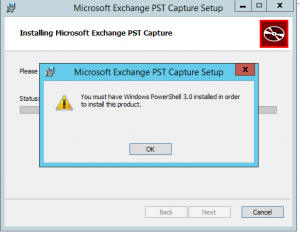 As Server 2012/2012R2 already comes bundled with PowerShell 4, we know this isn’t a requirement but the software doesn’t…  Thankfully there is an easy work around.  Download and install SuperOrca.  Open the MSI and drop the row requiring PowerShell 3.